During the changeover march, music is played by the Band of the Royal Life Guards. Afterwards, the officers of both watches go to The Queen to report on and off guard duty. On the palace square, the Band of the Royal Life Guards gives a small concert of three to five numbers. The actual relief of the watch takes place with the incoming guard inspecting the sentry cape as well as the sentry box at which the guard will stand.

Changing of the Presidential Guards in Athens, Greece

The watch that has been relieved marches with its flag to the residence palace, and then there is a march back to the Life Guard Barracks, while music is played. As part of this watch, the parade marches at The smallest type of watch is called a Palace watch and is established when no royal family members are residing at Amalienborg.

When a Palace watch is established, a commanding sergeant and the guard force march from the Life Guard Barracks at At Fredensborg Palace, the watch is established when either The Queen or the Crown Prince Couple stay at or are in residence at the palace. Skip to main content. Changing of the guard at Amalienborg. The Life Guard stands watch over the royal family. During that time, you can experience music daily on Amalienborg Palace Square around Where you can see more than the top of a bearskin cap over a sea of heads in front of Buckingham Palace.

Changing of the Guard at Buckingham Palace

While awaiting the arrival of the New Guard's Regimental Colour the band, accompanying them forms a circle and plays a selection of music. This symbolic gesture represents the transfer of responsibility for the security of the Palace's from the Old to the New Guard who, until relieved, will be The Queen's Guard. After this salute the officers, of both the Old and New Buckingham Palace detachments, salute the Senior Captain on parade with their swords.


Retiring to the guardroom, they will report to the Senior Captain after completing handover procedures with their Senior Non-Commissioned Officers. During this period the Ensigns, carrying their respective Colours, patrol the area before the Palace from left to right. Officers not directly involved in the ceremony march in step along the west side of the Guards. As each new sentry is posted, a Corporal distributes any special orders, previously collected personally from the Palace by the Captains of the Guard. During these procedures the Regimental Band, originally accompanying the New Guard, moves to the centre of the forecourt, forms a semi circle and perform a programme of music.

Changing of the Guard Dates & Times

Pipers who occasionally accompany the Old Guard, on the march from St. James's Palace, also provide music at this point in the ceremony. The original sentries, having been replaced by sentries from the New Guard, including those still on duty at St. James's Palace, return to complete the Old Guard. The duty bugler informs the Director of Music that the handover is complete.

The band then reforms in front of the centre gates. Having left the Palace, the Old Guard 'breaks into quick time' and continues its march back to Wellington Barracks. 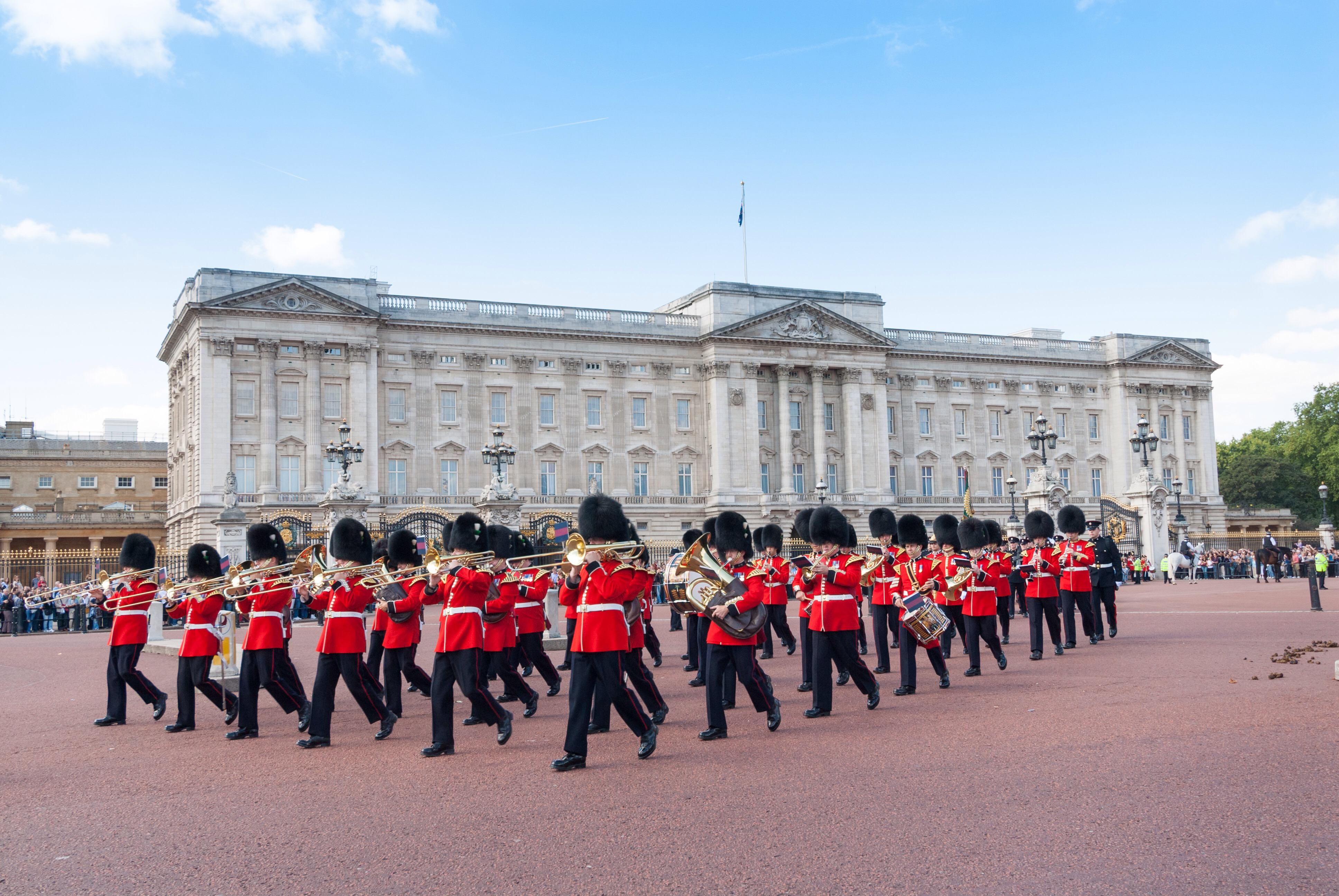 A sentry will come to attention, every 10 minutes, slope arms and march across their post, normally about 20 paces in total, having repeated this four-five times the guard halts, shoulders arms and returns to standing at ease. Sentries are not permitted to stand easy whilst at their post, indeed it is in the orders for the sentry that are read out to them at the beginning of their 'tour of duty', "you may not eat, sleep, smoke, stand easy, sit or lie down during your tour of duty". The first way they do this is by coming to attention, as the crash of a studded ammo boot striking concrete, is a good way to grab attention, and this is usually accompanied by a shout of ' Stand back from the guard ' or something similar.

Should the nuisance persists the sentry repeats the above and moves his weapon , to the slope with a similar shout.

The final warning is to issue an official challenge to the person. The sentry will slope arms and then move the weapon into a position called 'port arms' where the weapon points at the person. This is considered the final warning and the next step would be for the sentry to either detain the person or seek assistance. If there is a threat from arms or other weapon, the sentry can seek, or in some cases already have, permission to discharge their weapon to stop the assailant.

There have been no recorded discharging of weapons from sentries on public duties. Should members of the public get in the way of the Foot Guards, The Guards will not march around them. The usual phrase to make people move is " Make way for the Queen's Guard ".